With the Detroit Opera House now open, we are currently in rehearsal for one of the most significant projects in the company’s 50-year history: a major new production of Anthony Davis’ opera X: The Life and Times of Malcolm X, directed by Robert O’Hara.

I’ll never forget the first time I saw that famous photograph: Rabbi Abraham Heschel, marching from Selma to Montgomery in 1965, his arm linked in solidarity to Martin Luther King Jr.

I was an undergraduate at UC Berkeley — a center for civil rights activism even in the late ’90s — and found, through Heschel, a socially engaged path for connecting to my own Jewish identity. His writing argued irrefutably that a spiritual life cannot be divorced from the life of the streets, and each of us are called not just to save our souls but to repair the social fabric everywhere we see it ripping.

Heschel didn’t just talk the talk, he famously walked the walk — and it didn’t take much research to find evidence of the remarkable friendship he shared with King, from the Selma march to Vietnam protests and to their frequent joint lectures. Seeing the rabbi and reverend side by side, proudly bedecked in flower wreaths, left an indelible impression that still forms the foundation of my thinking.

Heschel’s presence at the march made me aspire to living that kind of Jewish life, where, as he puts it, “there is no limit to the concern one must feel for the suffering of human beings … In a free society, some are guilty, but all are responsible.”

And, likewise, seeing the serene joy on Dr. King’s face in those photographs, you can feel the care for humanity that acknowledges that no disenfranchised community can rise in isolation. Or, as King puts it, “We are caught in an inescapable network of mutuality, tied in a single garment of destiny. Whatever affects one directly, affects all indirectly.”

The complex relationship between the Black community and the Jewish community in America is difficult to untangle; among the most lamentable dynamics in a racist society are the misunderstandings that arise between oppressed victims, which distracts them from unifying against their true oppressor. Many non-Orthodox Jews may not face the snap-judgment racism Black people endure daily — but 50 years after the march on Selma, a different group carrying tiki torches in Charlottesville, Va., made it clear to the country that Black and Jewish people still constitute the primary threats to their imagined superiority.

Now, in the wake of a powerful racial reckoning — and with a despicable backlash underway in school board meetings and legislative offices across the country — it is vital that our communities stand in solidarity with each other and that we exemplify a fortified “network of mutuality.”

What Does Opera Have to Do With It?

Now what, you might be wondering, is an opera director doing talking about all this? Isn’t opera the province of ancient times, of royalty and European values? Opera, actually, has quite a few similarities to religion; in both, a congregation comes together in song to recite profound, usually older texts and investigate what it means to be human. My own brand of Judaism hews closely to how I view and create operas: in both fields, tradition requires constant examining, rather than blind obedience; no matter how old the text, the act of constant reinterpretation offers ever-fresh insight; and no matter how tight the community, a broader social responsibility is a crucial tenet of our viability.

I took the role of artistic director for Detroit Opera during the pandemic to make deeper connections between the artform of opera and the communities of the Metro Detroit region. My tenure began while the opera house was shut down, so I brought opera outside and onto new stages (or, in the case of a couple parking lots, non-stages).

This was, nevertheless, an opportunity to make opera a vessel for contemporary issues: in September, Detroit Opera presented Blue, a searing new opera by Jeanine Tesori and Tazewell Thompson, telling the story of a fictional but all-too-real Black family coping with a loss at the hands of police violence. Blue was the first opera to be performed on the stage of the Aretha Franklin Amphitheatre in Downtown Detroit, and the constant coming-and-going of ships on the Detroit River offered the audience the reminder of this story’s bracing proximity to everyday life.

With the Detroit Opera House now open, we are currently in rehearsal for one of the most significant projects in the company’s 50-year history: a major new production of Anthony Davis’ opera X: The Life and Times of Malcolm X, directed by Robert O’Hara. Since its premiere in 1986, Davis has since gone on to win the Pulitzer Prize for music, but his first opera is such a wellspring of inspiration and audacity that it has come to be acknowledged as an undeniable masterpiece of American music. The brilliance of the score and the relevance of the subject matter have attracted widespread interest among other companies, and since announcing our production, we’ve been joined by the Metropolitan Opera, Lyric Opera of Chicago, Opera Omaha and Seattle Opera to co-produce this work.

Preparing for X: The Life and Times of Malcolm X

Preparing for this opera brought back my memory of those photographs of Rabbi Heschel and Rev. King — although, of course, Malcolm X and MLK Jr. have been too easily reduced to an untenable opposition. Both men are undergoing serious reevaluations at a critical moment in our cultural history: the saintly image of Dr. King “the dreamer” has been an exploitative tool for maintaining a racist status quo, as Ibram X. Kendi argued so convincingly in his 2021 essay “The Second Assassination of Martin Luther King Jr.” 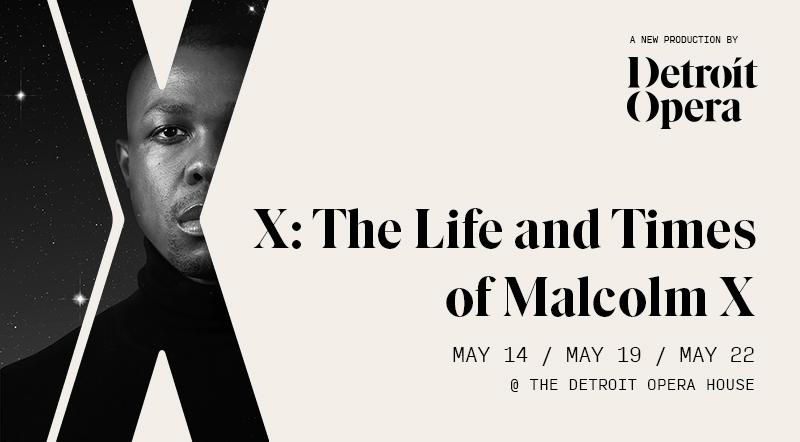 And in his extraordinary study The Sword and the Shield: The Revolutionary Lives of Malcolm X and Martin Luther King Jr., Peniel Joseph braids their two lives together to argue that, rather than offering opposing views, the men had “convergent visions” that make them two sides of the same coin. Joseph cogently shifts the opposition away from non-violence versus violence and toward non-violence versus self-defense — a crucial point in understanding Malcolm X.

Malcolm X’s legacy has also seen an extraordinary reconsideration in popular culture, with common misperceptions undergoing a corrective lens. An invaluable contribution to our understanding of this iconic life is Les Payne and Tamara Payne’s National Book Award-winning biography The Dead are Arising, which deftly shows how much Malcolm’s legacy is shrouded in misunderstandings or partial views.

Back in 1986, however, Davis and his cousin Thulani Davis, the opera’s librettist, already knew how to make the most inspiring aspects of Malcolm X’s life into a powerful piece of theater. Focusing on Malcolm X’s spiritual evolution, the opera does not stop at the more sensational details of his story, taking us instead to his ultimate awakening, as Malik Shabazz, on a pilgrimage to Mecca and back, at the start of a new quest tragically cut short.

One of the most startling lines in Thulani Davis’ libretto is in Malcolm’s Act I aria: “As long as I’ve been living / You’ve had your foot on me, / Always pressing.”

The parallels to the murders of George Floyd and Breonna Taylor can feel crushing: has our society really evolved so little since this opera was first performed?

The fact that Malcolm X didn’t stop at that sentiment of subjugation but instead embodied a vision of empowerment is part of what makes him an essential figure in the fight for a more just society. It is a story that demands all of our attention and for all of us to participate.

Or, as Malcolm X frequently said, “We have to change our minds about each other.”