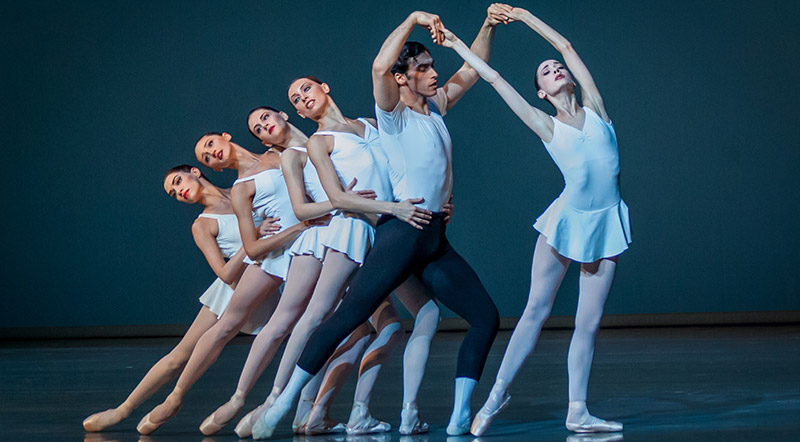 A rare US appearance from this world-class ballet company.

International ballet star Nina Ananiashvili (former prima ballerina with Bolshoi Ballet, The Royal Ballet, and American Ballet Theatre) leads this dynamic group with a program of mostly George Balanchine, considered one of the most important choreographers of the last century, accompanied by full orchestra.

“Georgia, a beautiful mountainous land in the Caucasus mountains between Europe and Asia, is the birthplace of Balanchine’s father, Meliton Balanchivadze. (…) The evening’s high point came after the first intermission, with the Georgian premiere of Balanchine’s 1941 chamber work, Concerto Barocco. (…) Barocco was staged lovingly by Bart Cook and Maria Calegari, and its acquisition subsidized, this reviewer is proud to say, by our own American embassy, under the guidance of ambassador Richard B. Norland. Afterwards at the reception in the theater’s lobby, Cook and his hard-working, now glammed-up young dancers hugged each other in a cathartic finale.”

“Presumably as a result of Ms. Ananiashvili’s training, the Georgian company bears many of her own best dance virtues. These dancers show a clean, unshowy style with none of the flamboyance or exaggerations that have characterized many Kirov and Bolshoi dancers, and plenty of technical strength.”

“Sagalobeli, created by Yuri Possokhov for this ballet company, was a fine work consisting of various formations. At the beginning, two men emerged onstage in sepia-colored spotlights. Georgian folk songs by an unaccompanied male chorus echoed something plangently lyrical, giving a feeling of unique warmth rooted in life culture.” 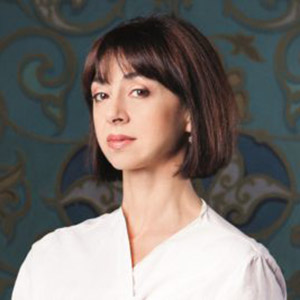 Nina Ananiashvili started ballet at the age of 10. She studied at Tbilisi Choreographic School with Tamara Vikhodtseva. In 1977 she pursued her education at Moscow Choreographic School, studying under Natalia Zolotova. From 1987 to 2004, she was prima-ballerina at Moscow Bolshoi Theatre. Under the guidance of outstanding ballerina Raisa Struchkova, she produced and performed all parts of the classical ballet heritage. The first season of the Bolshoi Theatre turned out to be triumphant for Ananiashvili. She performed Odette-Odile (Swan Lake) in Hamburg, Germany during the tour and received a 30-minute non-stop ovation after the performance. Ananiashvili is the only ballerina honored with four prestigious international ballet awards including Varna (Bulgaria) X International competition gold medal (1980); Moscow IV International Competition Grand Prix (1981); Moscow V international competition gold medal (1985); and Jackson (United States) III International Competition Grand Prix (1986). Since September 2004, Ananiashvili has been an artistic director at Z. Paliashvili Tbilisi Opera and Ballet State Theatre, as well as principal at V. Chabukiani Choreographic State School. She has been invited as a jury member and staging choreographer to various theaters around the world. Ananiashvili is honored with the title of People’s Artist of Georgia (1989) and Russia (1995); Zurab Anjaparidze and Rustaveli State Prize (1993); and The Presidential Order of Excellence (2010). She was awarded with the State Prize of the Russian Federation - For the Merit to the Fatherland (2001). Ananiashvili is the first ballerina to hold the Russian national prize “Triumph” for achievement in art (1992). The American Biographical Institute granted her the title of Lady of the Year (1997). She was awarded with the International Prize Golden Goddess (1999) set by successor of Royal family of France: Princess Marie de Bourbon. She was named as a Dance Magazine Prize winner (2002). She was elected as a United Nations Goodwill Ambassador in Georgia (2007) for achieving the Millennium Development Goals. The President of Italy awarded the prima ballerina with the Italian Solidarity Medal of Honor (2011).

In the 1880s and 1890s, the St. Petersburg Emperor Ballet Theatre performed in Tbilisi and dancers including Sofia Fedorova, Isadora Duncan, Vera Fokina, and Mikhail Fokine appeared on stage. During this time, Mikhail Fokine was staging his first innovative ballet, which later earned him recognition in Paris as part of the Diaghilev Seasons.

In 1891, Italian dancer Maria Perini, who was a student of Italian dancer Enrico Cecchetti, made her foreign debut at the Tbilisi Opera Theatre and famously wowed audiences with her 32 fouettes performing in Swan Lake. For the first time, Georgian audiences witnessed the level of ballet art abroad. From 1897 to 1907, Perini was prima ballerina at the Tbilisi Opera and Ballet Theatre and later taught ballet. She founded the first choreographic studio for classical dances, lived in Georgia for 48 years and considered it her second homeland. Her methods of classical teaching prepared a solid foundation for the creation of Georgian ballet. Before returning to Italy in 1936, Perini attended the first Georgian ballet, Andria Balanchivadze’s Mzechabuki (known as The Heart of Mountains in the following performances), staged by her student Vakhtang Chabukiani, and it became clear to her that Georgian ballet was in safe hands.

Chabukiani graduated from the Leningrad Choreographic School in 1929, worked in the Kirov Opera and Ballet (Mariinsky) Theatre and performed all the leading roles from the classical repertory. He staged The Heart of Mountains in the Mariinsky Theatre after the Tbilisi performance; A. Krein’s ballet Laurencia was his next success, staged in Kirov in 1939. Chabukiani returned to Tbilisi in 1941 and managed the Opera and Ballet State Theatre’s Ballet Company until 1973, working as the Director of The Tbilisi Choreographic School at the same time and raising generations of Georgian ballet stars.

In the beginning of the 1970s, the Ballet Company named Gogi Aleksidze as its artistic director. Aleksidze was Feodor Lopoukhov’s student and who founded the “Young Ballet” group in Leningrad during the 1990s. Raised on Lopoukhov’s ideas and innovations, Aleksidze brought a new esthetic to the theater. Neoclassical ballets became part of the repertory alongside classical works. The company’s next artistic director from 1982 to 1985 was Mikhail Lavrovsky, who was a widely known Bolshoi Theatre dancer and choreographer.

Since September 2004, Nina Ananiashvili has been artistic director at Z. Paliashvili Tbilisi Opera and Ballet State Theatre as well as principal at V. Chabukiani Choreographic State School. Under Ananiashvili’s leadership, more than 60 ballets and miniatures have been staged at the Georgian Opera and Ballet Theater in Tbilisi.. The theatre’s repertory includes both new choreographic versions of classical ballets, as well as works by George Balanchine, Sir Frederick Ashton, August Bournonville, and Jiří Kylián. Alexei Ratmansky, Alexey Fadeechev, Yuri Possokhov, Trey McIntyre, Stanton Welch, Jorma Elo and other choreographers collaborate with the theatre, and the company has toured in the United States (2007, 2008 and 2010), Japan (2007, 2010, 2012, 2017), Israel, Egypt, Italy, Spain, Estonia, Taiwan, Ecuador, Azerbaijan, Armenia, Ukraine, and Belarus. In 2008, the ballet company of the Georgian Opera and Ballet Theater was awarded the prestigious Herald Angels award at the Edinburgh International Festival. In 2012, Ananiashvili’s 30-year career was celebrated at an event that included international ballet celebrities.