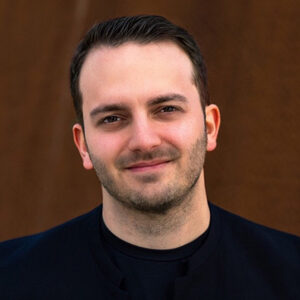 On November 20, 2022, Roberto Kalb was named Music Director. The Mexican American conductor is quickly establishing himself as an artist of great versatility, and has become known for his dynamic and sensitive conducting of both masterworks and contemporary operatic and symphonic repertoire. As a key member of the Detroit Opera’s artistic team, Kalb joins Yuval Sharon, Gary L. Wasserman Artistic Director, and Christine Goerke, Associate Artistic Director, to present musical performances that reflect the company’s reputation as the destination for groundbreaking opera in America.

Kalb made his Detroit Opera conducting debut in the 2017–18 season with Ricky Ian Gordon’s 27, and he returned in April 2022 to lead Sharon’s reverse-chronology production of La bohème. In the 2022–23 season, he makes debuts with the San Francisco Opera, Compañía Nacional de Ópera at the Palacio de Bellas Artes in Mexico City, and the San Diego Opera. The 2021–22 season marked his debut with the Opéra Orchestre National Montpellier, as well as return collaborations with Wolf Trap Opera and the National Symphony Orchestra. He was resident conductor and head of music at Opera Theatre of Saint Louis for five seasons, through 2019; he led the company’s world premiere of Tobias Picker’s Awakenings and the critically acclaimed run of Rigoletto in collaboration with the St. Louis Symphony Orchestra. He has led productions at Florida Grand Opera, Tulsa Opera, Kentucky Opera, and Opera Maine, as well as performances with the Orquesta Carlos Chavez in Mexico City and the Orquestra Sinfonica da USP in São Paulo. He holds degrees from the University of Michigan and the San Francisco Conservatory of Music, is recipient of a 2021 Solti Foundation U.S. Career Assistance Award, and is married to soprano Mane Galoyan.

In addition to leading Detroit Opera performances, Kalb also builds and sustains the artistic quality of the Detroit Opera Orchestra and Detroit Opera Chorus and engages in fundraising, education, and community engagement activities throughout the city. “I can’t imagine an opera company that is more in touch with what it means to produce opera for our modern-day audiences, or one that is better attuned to its community,” says Kalb.