I can’t imagine an opera company that is more in touch with what it means to produce
opera for our modern-day audiences, or one that is better attuned to its community.
— Roberto Kalb

DETROIT, November 2022—Detroit Opera has announced that Roberto Kalb will be its next Music Director, effective November 20, 2022 through the end of the 2025–26 season. In this position, Kalb will join Gary L. Wasserman Artistic Director Yuval Sharon and Associate Artistic Director Christine Goerke as a member of the company's artistic leadership under President and CEO Wayne S. Brown.

“I am thrilled to become the Music Director of Detroit Opera," says Kalb. "I feel deeply connected to this company, orchestra, and community. I can’t wait to continue and aid in Detroit Opera’s leading-edge artistry, under Wayne Brown’s leadership, with Yuval Sharon’s pioneering artistic vision, and to work closely with the brilliant Christine Goerke, and the amazing Detroit Opera staff. I’ve had such fabulous rapport with the Detroit Opera Orchestra from the get-go, and I’m excited for the many projects and operas that we will bring to life together in the coming seasons. I can’t imagine an opera company that is more in touch with what it means to produce opera for our modern-day audiences, or one that is better attuned to its community.”

Kalb made his Detroit Opera conducting debut in the 2017–18 season with Ricky Ian Gordon's 27, for which he also arranged a reduced orchestration. His most recent appearance was in April 2022, when he led Sharon’s reverse-chronology production of La bohème. In addition to his work with Detroit Opera, Kalb has roots in Detroit and the state of Michigan: he holds a degree from the University of Michigan, and previously worked as cover / assistant conductor for the Detroit Symphony Orchestra.

In this new position, Kalb will report to Artistic Director Yuval Sharon and work closely with Associate Artistic Director Christine Goerke to ensure that Detroit Opera's musical performances reflect the company's reputation as the destination for groundbreaking opera in America.

Kalb will also conduct at least one production per season, beginning in the fall of 2023, and work alongside Assistant Music Director and Chorus Master Suzanne Acton and Head of Music Nathalie Doucet to build and sustain the artistic quality of the Detroit Opera Orchestra and Detroit Opera Chorus. As a representative of Detroit Opera's artistic leadership, Kalb will also work closely with members of the Metro Detroit community in fundraising, education, and community engagement activities.

“Roberto’s reputation at Detroit Opera preceded him, but I was overjoyed to experience his excellent musicianship and his collaborative ethos during La bohème last April,” says Artistic Director Yuval Sharon. “By accepting the challenge of performing Puccini’s classic work in reverse order, Roberto proved that you can be a master of a style and stay open to new ideas and perspectives on how that music should be approached. He led the orchestra with rigor and care, and their overwhelming enthusiasm for his artistry and his manner made him a natural fit for the role of Music Director. I am certain his guidance and perspective will continue honing a sense of ensemble and excellence that Detroit deserves in every performance.”

“I am thrilled that Roberto is joining the team at Detroit Opera," says Associate Artistic Director Goerke. "His obvious love for the genre fuels his passionate conducting, one that facilitates the storytelling and drama of every work. He is an incredibly fine musician who is always able to be open to the ebb and flow of the work, while also being a pillar of strength and model of leadership on the podium.”

Kalb is only the second Music Director in Detroit Opera history after founder and former Artistic Director David DiChiera, who held the position from 1963—first with Overture to Opera, the progenitor of the modern Detroit Opera—through his retirement from the position in 2016. Other major music personnel within the company include Suzanne Acton, who has held the role of Assistant Music Director and Chorus Master since 1986, and Nathalie Doucet, who was named Head of Music in 2021 and has spearheaded the newly relaunched Detroit Opera Resident Artist program.

“Roberto Kalb is well known to members of the Detroit Opera Orchestra and fills a role of Music Director that has remained unfilled until now," says President and CEO Wayne S. Brown. "He will bring a unique buoyancy to the music experience at Detroit Opera. Since he obtained his master's degree from the University of Michigan, this appointment realizes a homecoming of sorts for Roberto. He returns to Detroit after conducting our post-pandemic return to the stage with La bohème.”

Mexican-born conductor Roberto Kalb has become known for his dynamic and sensitive conducting of both masterworks and contemporary operatic and symphonic repertoire. He was resident conductor and head of music at Opera Theatre of Saint Louis for five seasons; he concluded his tenure in 2019 with a critically acclaimed run of Rigoletto in collaboration with the St. Louis Symphony Orchestra. He has also led productions at Florida Grand Opera, Tulsa Opera, Kentucky Opera, and Opera Maine, as well as performances with the Orquesta Carlos Chavez in Mexico City and the Orquestra Sinfonica da USP in São Paulo.

This season, Kalb makes debuts with the San Francisco Opera, Compañía Nacional de Ópera at the Palacio de Bellas Artes in Mexico City, and the San Diego Opera. Highlights from recent seasons have included a debut with the Opéra Orchestre National Montpellier, return collaborations with Wolf Trap Opera and the National Symphony Orchestra for La traviata, and Opera Theatre of Saint Louis for the world premiere of Tobias Picker’s Awakenings.

Kalb was a recipient of a 2021 Solti Foundation U.S. Career Assistance Award. He holds degrees from the University of Michigan and the San Francisco Conservatory of Music. 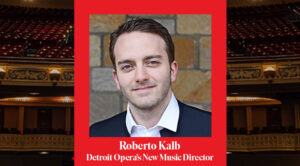 Detroit Opera has announced that Roberto Kalb will be its next Music Director, effective November 20, 2022 through the end of the 2025–26 season. 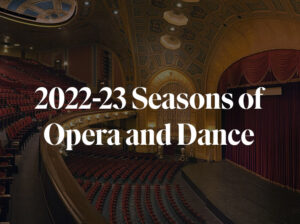 After a whirlwind couple of years, the 22-23 season sees us returning to the Detroit Opera House – but expect the unexpected,... 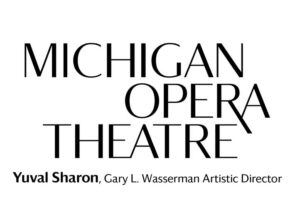 Michigan Opera Theatre receives $150,000 grant from the National Endowment for the Arts as part of the American Rescue Plan

[Detroit, MI] – Michigan Opera Theatre (MOT) is pleased to announce we have been approved to receive an American Rescue Plan grant from the National Endowment for the Arts (NEA) to help the arts and cultural sector recover from the pandemic.